like 100 times and so I'm finally going to reply to a tag.

7 random things you probably don't know about me:

1. I eat a PB&J almost everyday for lunch.
Which probably has something to do with the fact that
I still haven't lost the baby weight I gained with both
girls.

3. I was on Oxford's (Mississippi) Most Wanted TV show as
a freshman. Some buddies and I thought we'd steal some street
signs for fun. ***note to any thieves out there. Don't
take pictures of yourselves with the stolen signs, esp.
when the license plate # is visible in the picture!

4. I learned how to waterski at the age of 3, slalom by 11,
and completely bored with it by 15. I then learned how to
wakeboard while at kamp (Kanakuk), and that's all I've been
doing since.

5. I supposedly have a genetic disorder called trisomy 8.
It's literally supposed to be so rare that one in a million
people have it. I say "supposedly" because I have no
physical effects of it, but they say it's why I have such
complicated pregnancies. If in fact I DO have it, then
I'm the only ever documented case of a woman who's
successfully had children with it. (And I have conceived
three.)

6. I got my first yellow card ever two years ago while
coaching middle school volleyball. and I got it because
the ref thought that I was yelling at him, but I was
actually telling my girls what to expect next. Regardless
he said it was because I wouldn't sit down in my chair.
I get too pumped up to sit in my chair, but I've had to
learn! :D

7. In all the teenage relationships I've ever had, I was
always the one to break up with the other person. I ususally
got bored with him after a while.

So there you have it. 7 random (and hopefully interesting) facts about me. I'm not going to tag anybody, because i think that all the people who've tagged me or the ones that I would tag, have already done it. I must be the last blogger on EArth to not have done this. Oh well. I've done it now! ;)
Posted by Deanna at 2:57:00 PM 8 comments:

I always find myself very productive when it comes to Simply Obsessed crops! And this weekend was no exception. I think in total, including my samples for my challenges, I created 7 LOs and altered my scap journal. Those LOs helped me complete 10 of the 16 challenges and I still have several more I want to attempt. I feel very accomplished. AND after their last crop I was all scrapped out, but after this one, I just feel rejuvenated and ready to create more! LOVE that feeling! Now I've got to get to work on my Crop Addict DT layouts while the gettin's good! KWIM? Here's a peek at what I got accomplished! TFL! 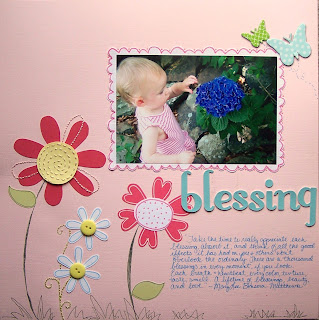 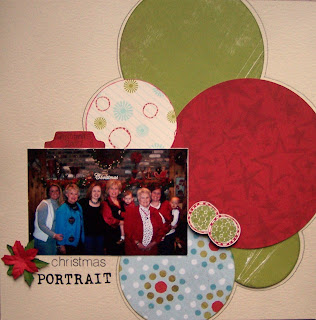 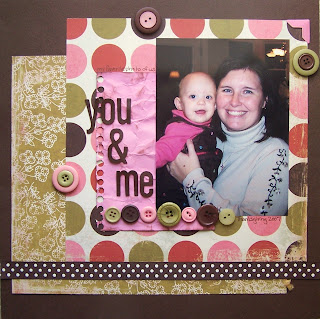 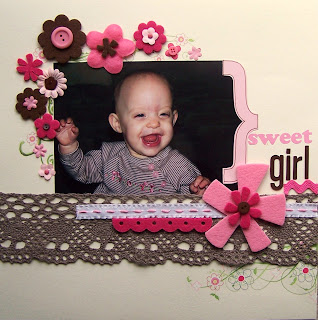 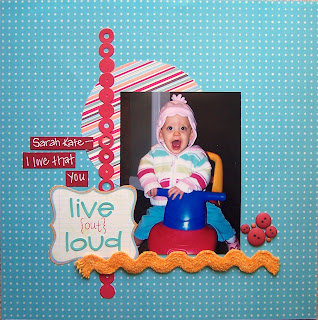 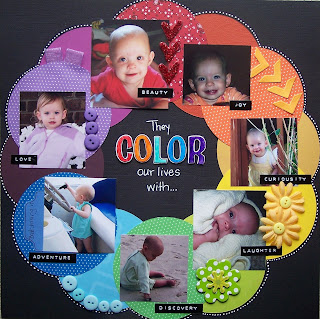 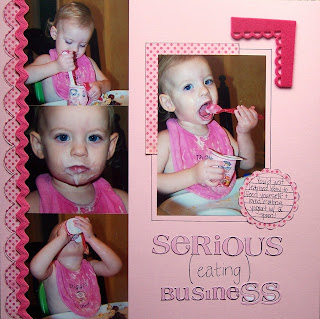 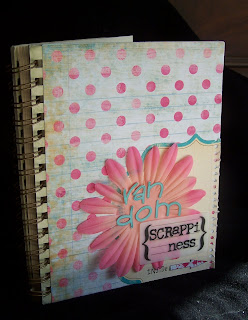 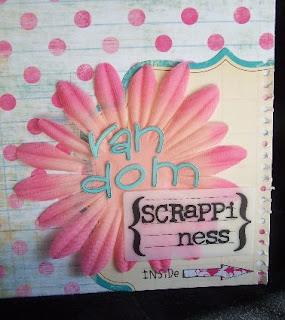 Extra! Extra! Get your Pink Paislee!

The April kit at Simply Obsessed is the Pink Paislee Spring line!! Wooohooo! You guys know I LOVE this stuff! BUT if you'd like the Office Lingo line instead, it's featured as an add-on, along with some PP stamps and other cool stuff! So head on over and get your PP fix! I"m tellin' ya, these won't last long!!!
Posted by Deanna at 3:55:00 PM 3 comments:

I've been very sporadic in my scraping lately. But when inspiration hit, man did it hit! Thank goodness, because I was struggling for a bit. Anyway, here they are. 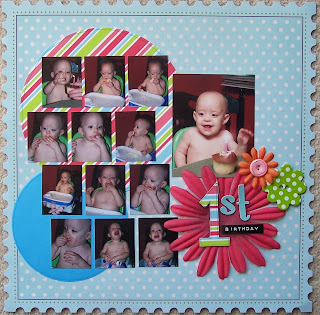 I did this one for the color story challenge. They posted a sketch and a color palette, which I loved working with!And doesn't Sarah Kate just look so precious with that cake all over her! She scarfed that thing down in 2 minutes, no kidding. She LOVED it! 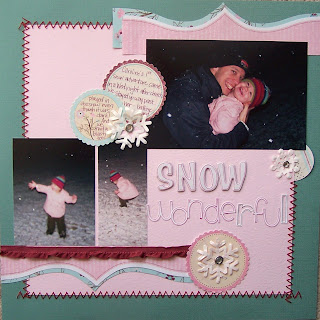 I did this one for Michelle's Monday Mojo at Simply Obsessed. The challenge was to use imperfect pictures. And since these pictures were taken at night, they came out blurry. But I wanted to scrap them anyway, and Michelle gave me permission! ;) 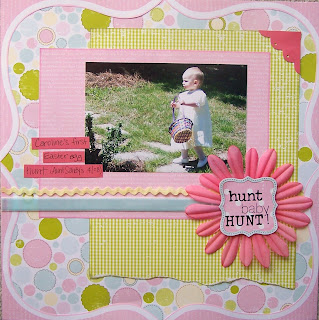 This is one that I did right after I got the MM Garden Party pack at Target. I LOVED working with it, just so springy! It put me in the mood for Easter, that's for sure!
Posted by Deanna at 3:16:00 PM 7 comments:

We finally got to celebrate Sarah Kate's b'day, which was March 1, this past weekend. Of course it tried to snow out my plans again. (FYI--if you want it to snow, ask me to throw a party!) I also learned that I probably shouldn't go to a crop on Friday night, then throw a party on Saturday. They don't go well together.

But we got some adorable pictures. I still can't belive that my baby's one! I don't like that they grow up! And of course have to throw one in of Caroline too! 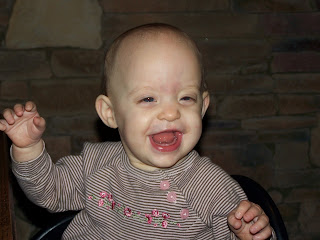 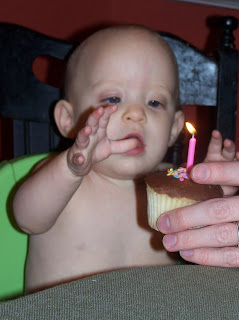 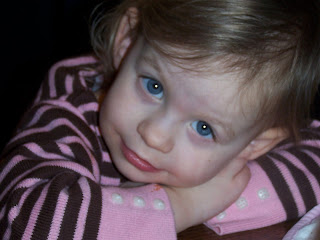 Yesterday we celebrated Sarah Kate's 1st birthday, because on her real birthday, we all had the flu. I can't believe she's getting so big! She's saying words, like "momma" and "dadda", "night-night" and "bye-bye". My baby's getting big!

Well, on with the story. Yesterday I was running around the house cleaning, vacuuming, mopping, etc., before half the family got here. And the cable guy came to intstall digital cable. So I was working around him, and Sarah Kate was following me around the house. At one point, the cable guy was working up in the attic, and I was in the kitchen. Sarah Kate decided to leave me, and I hear, "Da Da Dadda, Daaddeeeee, Dadda.." And it's coming from the attic. I found her perched on the bottom step, looking up the stairs at the cable guy saying "Dadda. dadda. da." I burst into laughter, and exclaimed, "SARAH KATE! The cable guys IS NOT your daddy!!" Then I heard him chuckle from upstairs!
Posted by Deanna at 9:51:00 AM 9 comments:

Join us for some March Madness!

And I don't mean basketball either! Simply Obsessed is having their Spring crop March 14-16. There will be lots of fun challenges, and even some that involved altering and card making. So it won't just be about layouts, although there will be some great LO challenges to. We'll have lots of fun, so I hope to see you there!
Posted by Deanna at 7:04:00 PM 3 comments:

So here's what I did with the Simply Obsessed March kit. I loved the challenged of working with the fun, busy, bright colored paper that made me long for Spring! This kit was so much fun, seemed to be full of energy, and I'm glad I got to scrap with it. Oh, and I'd never used the KI Memories hip chips, but they were fabulous! I love it when chipboard is self-adhesive and it actually stays put! 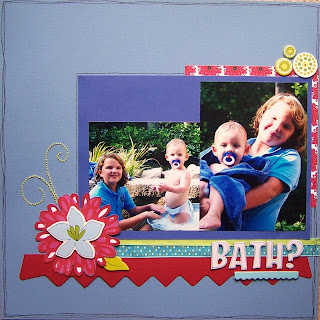 Our little friend Anna is giving Caroline a "bath"! Her sister, Holly, took these pictures. I thought they were a riot! Got a good laugh out of them, and so I scrapped them! Thanks Anna for helping me out, and thank you Holly for being such a great photographer! We love our friends! They're great babysitters too! :D 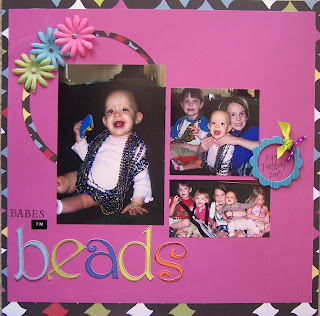 Sarah Kate dons her Mardi Gras beads. She's so happy about them too! 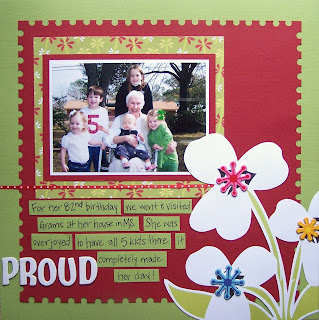 This one of Josh's grandmother and most of the grandkids has GOT to be my favorite! Just look at the sheer joy on her face! And it's ALWAYS a good shot when you can get 4 of the 5 kids to even look at the camera, let alone all smile at the same time. This one's definitely a keeper!

I don't think that I ever posted my LOs from the Crop Addict March kit either. So here they are. These kits have a TON of paper in them, and I always like to see how many I can stack on a page. I also gave hand-stitching a try for the first time. I must say, I think I love it! 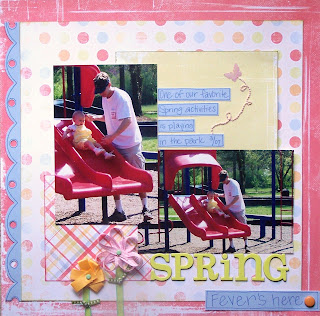 This is the one I stitched on. I made the flowers out of ribbons too! 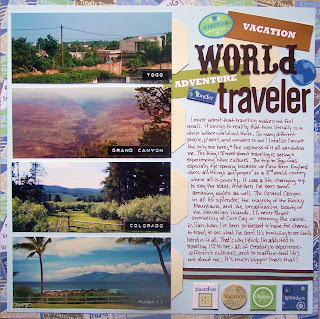 I loved highlighting the places I've traveled. It's fun to look back and see the variety of places, and think about the different cultures too. I couldn't find a great pic of Africa, so I had to go with this one. The rest are probably scrapped away somewhere. At least I hope they are! 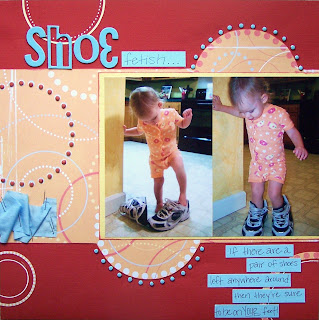 On this one I added the brads to give the LO more texture. I also painted them to match. It was a lot of fun! 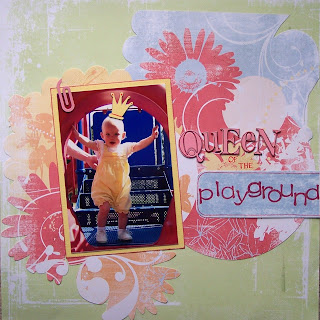 This is still one of my all-time favorite pics of Caroline. I got the idea of taking her picture in the arch from an Ali E. article in CK. Don't you just love that little crown?
Posted by Deanna at 2:19:00 PM 5 comments: